Most people love a good ghost story. One of those tales that sends a chill up your spine and makes your hair stand on end, that makes you wonder – is it true? According to eyewitnesses, there are a good number of haunted places throughout Arkansas. Do humans coexist with ghosts? Are the cold spots, apparitions, and noises simply coincidences, or do they have logical explanations? Whether you believe in ghosts or not, these locations ooze eerie history.

King Opera House
427 Main Street, Van Buren
The King Opera House has been painstakingly restored in recent years; however, it became ghostly in the early 19thcentury. A travelling actor fell in love with a beautiful young woman. When her father, the town’s doctor, found out about the relationship, he furiously beat the man to death. The employees of the opera house have said they rarely feel alone even though they are. Sightings of the young actor, wearing a top hat and coat, wandering backstage pining after his love, have been reported.

Four Quarter Bar
415 Main Street, North Little Rock
If you’re up for it, grab a bite to eat or a nightcap at the Four Quarter Bar in North Little Rock. One of the oldest buildings in the city, located in the heart of the Argenta Arts District, it has a sordid past. It once was a brothel and a bar where several violent murders took place back in the early 1900s. Those who work at the bar say strange things happen often. Legend has it that the previous owner and one of the prostitutes can be seen chasing each other around the bar. So, if you stop in for a drink, you may not be drinking alone.

The Ohio Club
336 Central Avenue, Hot Springs
Although ghostly activity seems to have slowed, the oldest bar in the state has a sordid history, including an illegal casino and speakeasy. Guests that frequented the club back then were Babe Ruth and gangsters, such as Al Capone, Bugsy Segal, and Lucky Luciano. The club is known for the circa 1880 mahogany backbar that still stands in the building. If the spirits don’t show themselves to you at the Ohio Club, then just step out onto Bathhouse Row and you may be greeted by a variety of paranormal activities. There is a haunted tour with a guide who will share all the dark history of Hot Springs. Visit hotspringshauntedtours.com.

The Arlington Resort Hotel and Spa
239 Central Avenue, Hot Springs
The Arlington Hotel in Hot Springs National Park is known for its stunning architecture; it is also said that it holds many dark secrets. While management says it’s not haunted, guests say the things that go bump in the night are real. The Arlington Hotel was another favorite spot for Al Capone and his entourage. According to local history, he would rent the entire fourth floor, and his favorite room was suite 443, because it has a private door that leads to a secret passage. Guests have reported the elevator will occasionally stop at the fourth floor as if to let someone on or off, but no one is there.

The Powhatan Courthouse
4414 AR-25, Powhatan
People at the courthouse will tell the story of Andrew Springer, who was a victim of a lynch mob in 1887. They say he lives in the attic of the Powhatan Courthouse and is seeking justice. Paranormal investigators say that his sister may also be there helping him find the truth. The beautiful courthouse, perched on the edge of the Black River, contains five original structures. In the past, the courthouse has offered a Ghost Walk, inquire for details.

Riverview Hotel
100 Rodman, Calico Rock
There have been many ghostly sightings throughout Calico Rock. The Marketplace area was used for the Underground Railroad, and Union and Confederate soldiers have reportedly been spotted in the basement. But the most haunted locale is the Riverview Hotel. This beautiful two-story hotel overlooking the White River was built in 1903, but it burned and was rebuilt in 1923. Guests and employees say there is a man, woman and cat who still wander through the rooms of the hotel. Although a paranormal team didn’t find any activity, people who visit the hotel say otherwise. One guest reported waking up with a woman in a long white dress standing at the foot of his bed. Another guest reported seeing a man in a three-piece suit sitting in one of the rooms. Rumor has it that one of the owners had room 7 exorcised in the 1990s.

The Gurdon Light
Interstate 30, Gurdon
The mystery of a haunting light along the railroad tracks in a wooded area has piqued the curiosity of many over the years. In 1994, the television NBC show Unsolved Mysteries produced an episode recreating the 1931 murder of William McClain, a railroad foreman who was hit over the head with a shovel and beaten to death with a railroad spike by an angry employee. The light was spotted shortly after his murder, and many people believe it is the ghostly lantern belonging to McClain. Some believe there’s a logical explanation, such as pressure on the quartz crystal under the ground. Whichever the explanation, people still travel to see the mysterious light on the railroad tracks.

Crescent Hotel and Spa
75 Prospect Ave, Eureka Springs
It wouldn’t be a ghostly tale without mentioning the most famous haunted hotel in America. Its paranormal happenings have been featured on several television shows. The hotel was built in 1886 as a luxury retreat. Many believe that room 218 is haunted by an Irish carpenter who fell to his death during construction of the hotel. At one point in time, it was a women’s college, and a young woman fell to her death from an upper window. Many of the hauntings may have come after Norman Baker bought the Crescent in 1937. With his false cancer-cure claim, he turned it into a hospital where many patients died under his barbaric care. He would drill holes in their skulls and perform surgeries in the hotel basement. In 2019 during a landscaping excavation, 400 glass bottles containing human tissue and tumors were unearthed, all believed to have been from the Baker era of the hotel and now on display at the hotel. For information on a ghost tour, visit americasmosthauntedhotel.com.

Basin Park Hotel
12 Spring St, Eureka Springs
The Basin Park Hotel is the little sister of the Crescent Hotel. It opened in 1905, and because it was built on a site where many people died in a fire, legend has it there has been paranormal activity since it opened. Guests report seeing orbs, temperature fluctuations and human-shaped shadows. The Barefoot Ballroom seems to be one of the most active areas of the hotel. Recently, a tour guide claimed to have been choked while giving a tour.

Are there other haunted locations in Arkansas? Send your ghost stories to catherine at dosouthmagazine.com,  we can’t wait to read them! 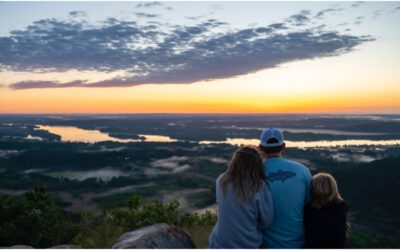