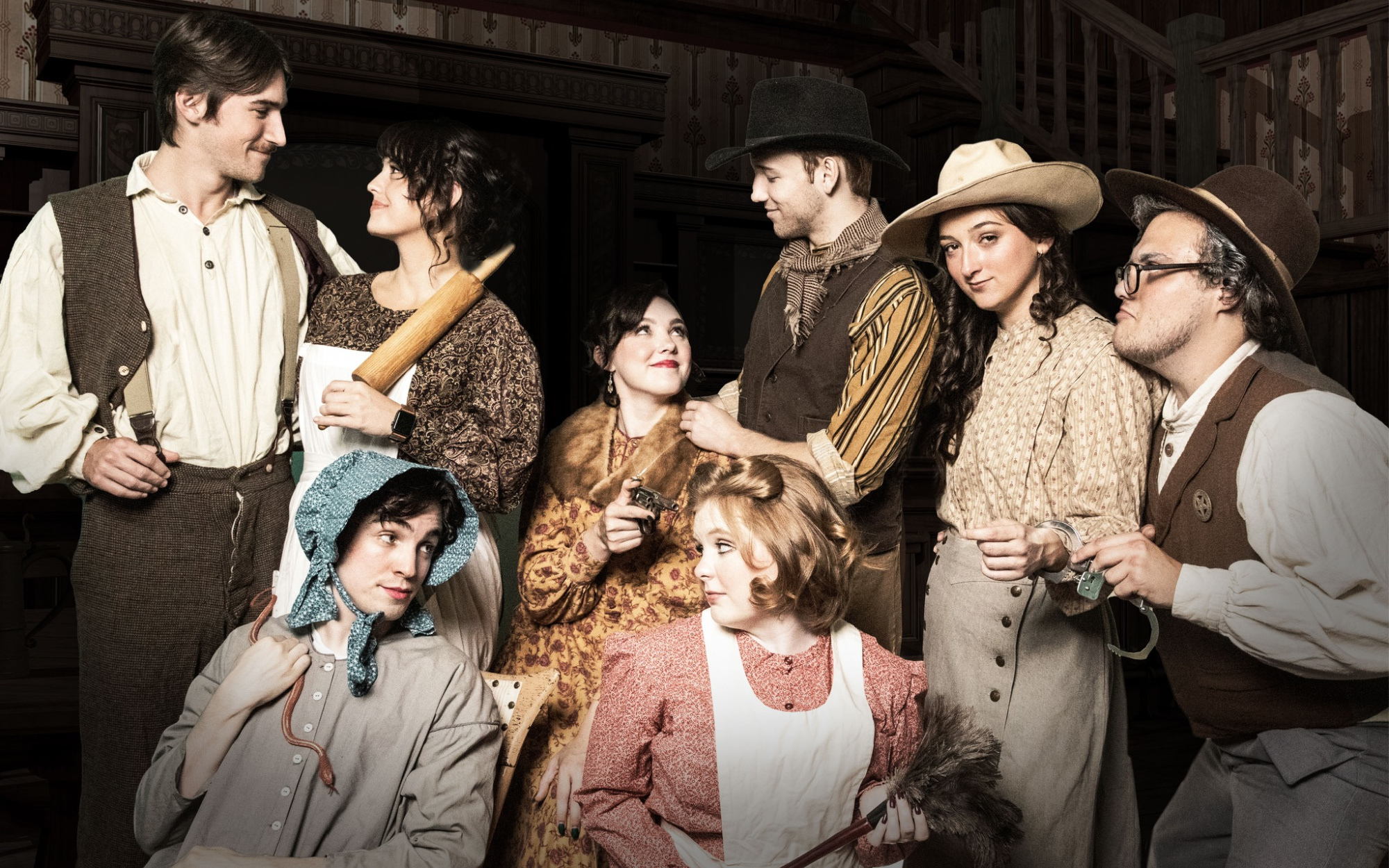 A new immersive theater experience is being offered in Chester, Arkansas

When Charles Dickens published his now-famous novella A Christmas Carol in 1843, the infant state of Arkansas was still crawling on all fours out of the much-unsettled frontier woodlands. Just a decade or so before, some 60,000 Native Americans and other displaced persons passed through these parts on the Trail of Tears, making their way westward to Indian Territory. Looming on the horizon, the storm clouds of the Civil War were gathering, at its heart, the issue of slavery. Across the sea, Dickens intended A Christmas Carol to be his own critical commentary of the social ills of Victorian England, specifically the cruelty and injustices of child labor aggravated by the Industrial Revolution. He could not have imagined this short tale of a miserly old humbug’s redemption would become arguably his most celebrated work, defining in many ways how we Americans celebrate Christmas. (Thank you, Mr. Scrooge, for purchasing that prize turkey for the Cratchit family!)

Fast forward to spring 2022. Writer Chuck King was invited by Kendee Hughes of Kendee Hughes Productions to visit the newly renovated inn and general store in Chester, the Beard and Lady. Kendee and her cousin Lacey Hendrix, the new owner of the Beard and Lady, had an idea… what if this almost forgotten structure, once the hub of the Chester hamlet, could host site-specific, immersive theater experiences – say, a murder mystery, for example?

Place serves as one of the strongest pools from which Chuck likes to draw his creative inspiration. His thirteen years as a resident of Israel were the springboard for several faith-based stage and film scripts produced by Legacy Media, based in Colorado Springs. These include a sweeping production of the history of Israel, stage, and film versions of the stories of Simon Peter, King David, and Queen Esther, and a complete rewrite of The Promise, an epic musical of the life of Christ staged annually in Glen Rose, Texas.

It would follow then, that when Chuck relocated his family to the River Valley in 2009, he became fascinated with the local history—and landscape—of Fort Smith and Van Buren.

“One of my friends in Jerusalem knew about the connection with Van Buren and the 19th century Jewish educator Cyrus Adler,” says Chuck. “He introduced me to the King Opera House before we even made the move. Once I stepped into that beautiful place, I was hooked.  I had to learn everything about it.”

That fascination eventually led to a regional Emmy win for the short film, Step into: the King Opera House, and then another Emmy for Chuck’s docudrama script themed around the infamous Fort Smith bordello and named for its proprietor Laura Ziegler; both aired on the Arkansas Educational Television Network.

But what about the Beard and Lady? What stories could it possibly afford Chuck that would lend themselves to the cousin’s vision of attracting new visitors to Chester? “Since Lacey grew up in the area, she is well versed on the history of Chester and the inn,” Chuck shared. “She told me about the family who owned the hotel at the turn of the century, and of a daughter named Kate who was famous for her pies. But the story goes that Kate had a naughty sister who got too friendly with the menfolk upstairs. Kate had to use her rolling pin as a deterrent. That little tidbit was enough to get my creative juices flowing. Besides that, Lacey and her husband Lance have transformed the old building into a work of art. Just being in the space is inspiring for me. Like Miss Laura’s or the Opera House, it has its own story to tell.”

Naturally, Kate and her floozy sister have made their way into the pages of Chuck’s first murder mystery offering at the inn: Bedlam at the Beard and Lady, being produced by Kendee Hughes and The 6ft Climb. But this experience is not based on a serious plot or intrigue.

“There is a murder story and a series of clues to follow,” explains Chuck, “but this is more than a Clue-like board game experience. Bedlam is an interactive comedic romp which moves the guests around the hotel and apothecary shop. You’ll meet some famous characters from Arkansas history—Belle Starr and Jesse James will make an appearance, but they are not to be taken too seriously. It’s more about the laughs and good times to be had along the way while solving the crime. It’s campy, a little bit naughty, and a whole lot of fun.”

Since Chuck serves as the full-time director of the Skokos Performing Arts Center in Alma, the director’s chair for the production has been filled by Chuck’s daughter Jessye Wooten. After a four-year stint as a company member of the Colorado Springs Fine Arts Center, Jessye returned to Arkansas to continue in her career. By her own right, she’s done stage, film and commercial work in California, Colorado, and Arkansas. She has directed for the Young Actors Guild, but this is her first gig directing an all-adult cast. 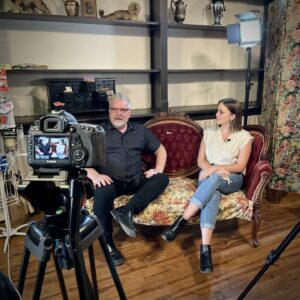 “Collaborating with my dad feels effortless and natural, it’s truly been a blast! We have different levels of expertise and working together has given us the freedom to play to our strengths and really bring the vision to life. We couldn’t do it without the incredible ensemble of local actors we’ve assembled! Their ambition and talent speaks for itself, I hope the community is as excited to experience this production as much as they’re excited to share it“.

But what the dickens has all of this got to do with Ebenezer Scrooge and A Christmas Carol? “All I can tell you is that during that first spring visit to the inn, the story just unfolded before me as we moved from room to room – I could see it from scene to scene.  I started to imagine, ‘What if Ebenezer Scrooge lived in Chester rather than London?  What if he was the owner of the general store and hotel? How would this affect the telling of the story in an exciting new way?’  And that’s how I came to write An Ozark ‘What the Dickens?!’ Christmas. All the characters you know and love will be there, they just won’t speak with British accents…they will sound more like our Ozark Mountains kinfolk!”

Chuck has assembled a creative team to pull off the immersive experience, including Steven Sellers, Audra and Shane Bocksnick, and Marti Salisbury, who will each appear in the cast as well as oversee certain elements of the show. Dane Masden leads the cast as the mean spirited but loveable Scrooge. The production is being presented by the Alma Education and Arts Foundation as part of its professional show season.

In the meantime, plans are already underway for a new script to be produced in historic downtown Van Buren in spring 2023, but Chuck seems unwilling to share too much about it. “It will be set in Van Buren during the 1920’s Prohibition era, and it will definitely take on a darker, more sinister tone than Bedlam. There’s some almost forgotten local lore that the story will be built on.  I just can’t seem to get away from the history piece…you know, ‘if these walls could talk’…that’s what I love to do – make the walls talk.”

TICKETING INFORMATION
Dinner served at both experiences
BEDLAM AT THE BEARD AND LADY runs now through December 31.
For tickets: the 6ftclimb.com

AN OZARK “WHAT THE DICKENS?!” CHRISTMAS runs December 9-18.
For information: skokospac.org 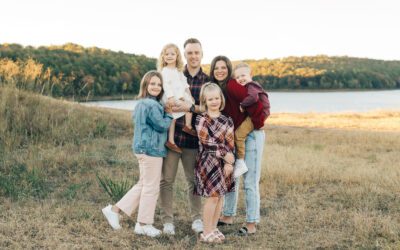 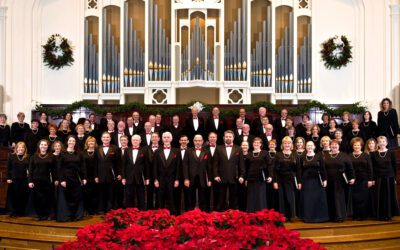